Well, it froze hard here. It got down to the lower 20's and my little greenhouse couldn't keep enough heat in and all the peppers, tomatoes and basil died. I'm assuming it will not get below 28 degrees for the rest of the winter, so I replanted tomatoes and peppers. my green house seems to be fine 28 and above, however I will be altering the design to be able to accommodate lower temperatures. While planting the new tomatoes and peppers, I also planted broccoli's, cauliflower, chives and a few types of onions.
at 10:00 AM No comments:

Today I transplanted the basil from the small seedling tray to larger 6 pack trays.
These are the pictures I took during the process. 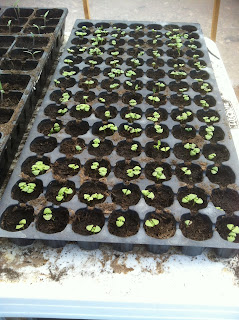 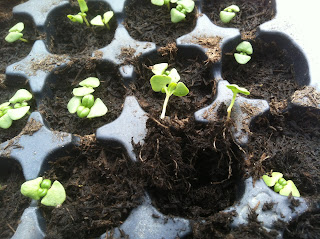 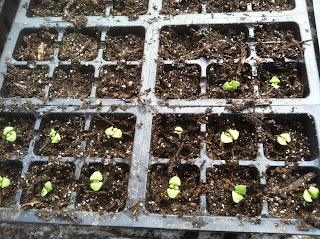 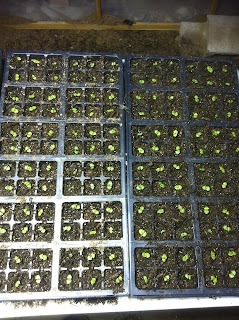 On the left is Italian Large Leaf Basil and on the right is Genovese Basil.

Also here is the progress of the peas for pea shoots.

Well 59 of the 96 heirloom tomato seeds I planted have come up. 16 of each type of seed we're planted the varieties are Cherokee Purple, Ben's Ivory Pear, Flame, Brandywine, Large Red Cherry, and Italian Roma. 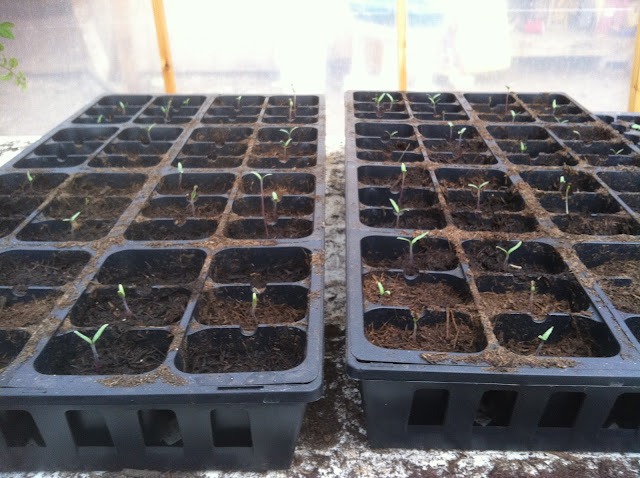 In addition to the tomatoes, I have been adding earthworms into the soil where my potted tomatoes are growing, and I am starting to see worm castings around the base of my tomato plants. I also started pruning the tomato plants to allow better airflow, to eliminate powdery mildew, and to hopefully make bigger yummier fruits.
at 11:43 AM No comments:

Getting Up to Speed

I am attempting to grow heirloom vegetables in the Las Vegas valley with as little money as possible. Due to the extreme environment I have supposed that it would be best to grow them in a greenhouse. So I have built a green house. 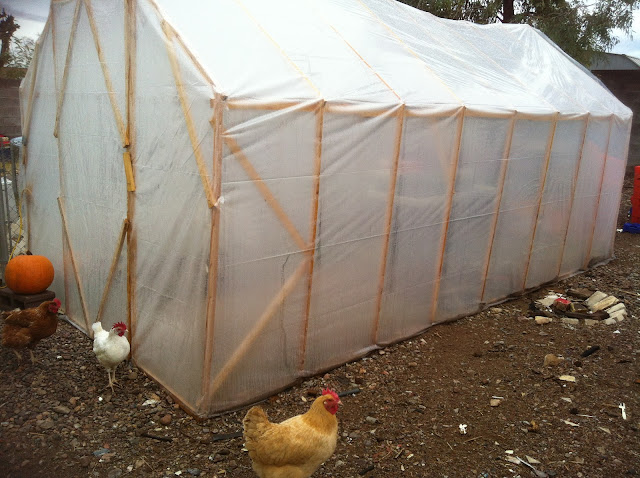 This greenhouse was completed about 6 weeks ago. It is made from 1"x2" furring strips from Lowes at $.89  a piece and Clear Plastic sheeting from Amazon for about $14 a piece. I used about 45 furring strips and 2 of the Plastic sheets. I assembled it with drywall screws, I pre-drilled all the holes to prevent the wood from splitting, and lots of staples. It is standing after 2 good wind storms with only a few adjustments. The more staples in the plastic the better.

The first things I planted in the greenhouse were peppers and tomatoes I bought from Star Nursery, its late fall so they were very cheap, I spent $3.21 on the 4 Anaheim peppers, 1 Bell Pepper and 2 heirloom tomatoes. 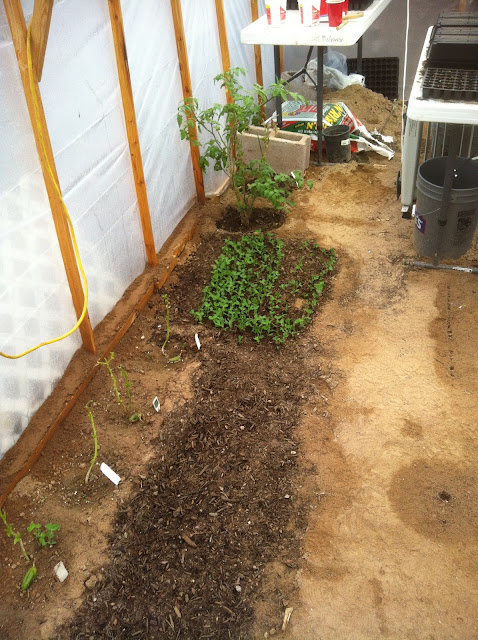 If you are wondering why the peppers have no leaves its because my chickens got into the greenhouse before I figured out how to keep the wind from blowing the door over. Apparently my chickens love pepper leaves but not tomato leaves. The leaves are growing back and the plants are not dead.

The next thing I planted were peas, I soaked them for 2 days till they sprouted and just put them on the ground, no soil amendments or anything, then covered them with some cardboard till they rooted themselves. This is what they look like a month later and being attacked by chickens twice. 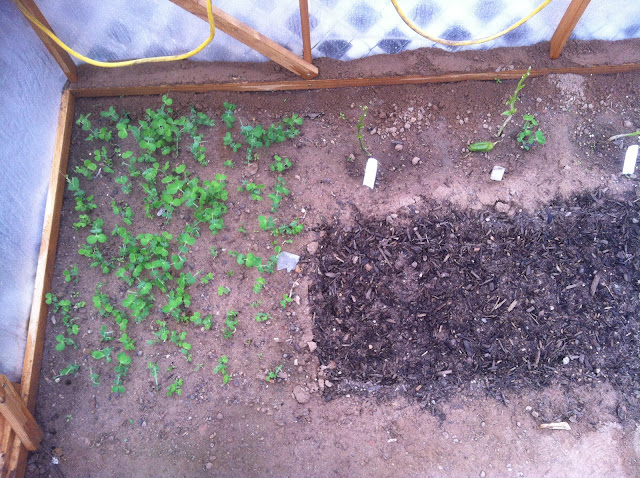 The sole purpose in growing the peas are for peashoots. I'm testing the best time to harvest in order to yield the most and taste the best. 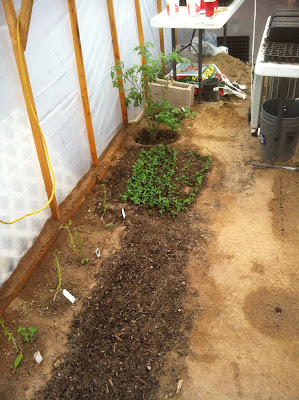 The darker soil you see here is 50% dirt 50% OMRI listed compost, from lowes at $7 for 3 cu. ft. I bought 2. The small plants in the mix are peas (for peashoots) that I grew in some trays then transplanted when they were about 1" tall. The rest of the mix has direct sown peas about 1" apart, they have not yet sprouted and its been about 7 days. 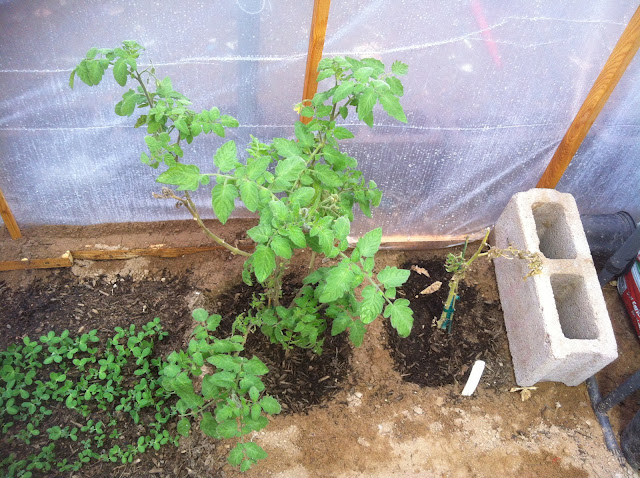 Here are my 2 tomato plants on the left is a Hawaiian Tomato and on the right is a Flame Tomato. they were both the same size when I got them (about 6 weeks ago) but the Flame had 2 tomatoes and a powdery mildew growing on the leaves. I let it sit for about 4 weeks and it seemed to be in stasis so I picked the tomatoes and sprayed the leaves with soapy water. That's when I found out that tomato plants don't like soapy water. I also learned that to prevent mildew and other diseases on plant you need good ventilation. 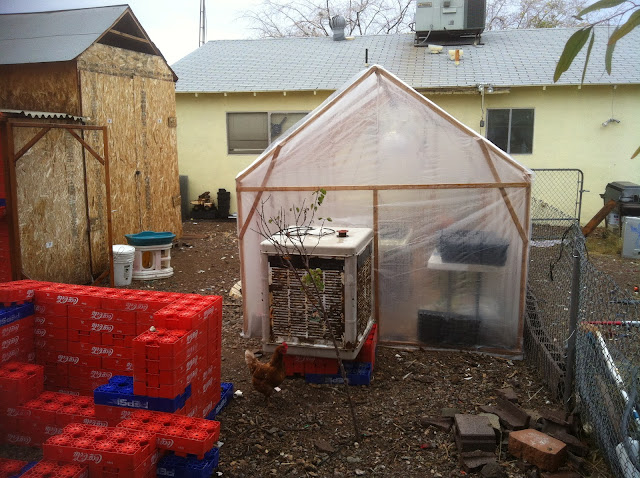 That is when I bought this swamp cooler off of Craigslist for $60, it was broken but I spent a few hours cleaning it and fixing it and other than the rust on the side panels its good as new.This cooler should be able to ventilate and cool a greenhouse 3 times this size so I should be good to go when I want to expand. 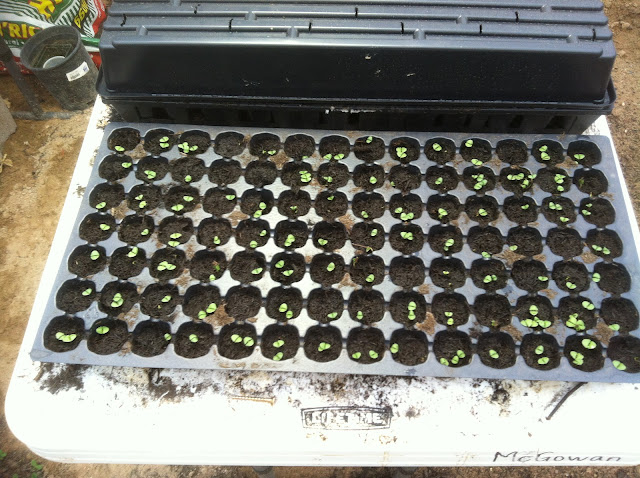 These are my basil plants I planted in these trays 3 weeks ago. The right half is Genovese Basil and the left half is Italian Large Leaf Basil.

I have noticed a couple things in doing this, plants seem to like consistent temperatures and like 24 hour light shining on them. 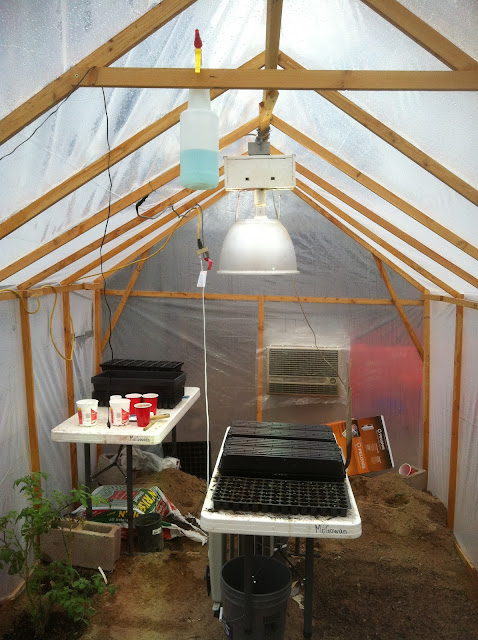 Under the table I have a radiator style electric heater set at about 65 F, and hanging above I have a 400 watt Metal Halide light. The heater was about $36 with tax from Walmart and the light was $60 from Craigslist. I had to take the ballast box apart on the light and rewire it for 110V, and I'm still looking for a photo-eye to automatically turn it on and off with the rise and set of the sun. The covered trays are my Heirloom tomatoes I planted about 11 days ago. I'm still waiting for them to sprout but they have only have had the heater for 4 days at this point. I think I should start seeing the sprouts any time now, then I will uncover them.
at 10:47 AM 1 comment: